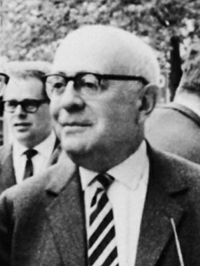 Concerned primarily with the issue of human suffering, German philosopher Theodor W. Adorno (1903-1969) significantly influenced German scholars and intellectuals after WWII. He earned his degree in Philosophy and spent two years studying music in Vienna. His early musical writings (The Fetish Character of Music and the Regression of the Listeners) were the first to reveal his long-term disdain for what he dubbed the “culture industry,” which makes people passive consumers instead of active participants.

While not Jewish himself, Adorno was forced to flee Germany for England and the U.S. during the Nazi occupation. Fascism and totalitarianism became strong themes in his writing as he critiqued civilization’s tendency toward self-destruction, and pondered the dark side of rationalizing humanity. Co-authored with his friend, Horkheimer, Adorno’s best-known work, Dialectic of Enlightenment, further developed the idea that rationalism had become irrational.

In Minima Moralia, he contemplated the dehumanization of civilization caused by the industrial era, and wrote that there was no chance to lead a good, honest life anymore. Mankind had become cogs in a machine, either playing the producer or the consumer, but neither one being free.

He argued that reason was a tool used to control people. Human emancipation, he said, could only be found through creativity and the pursuit of individual autonomy and happiness.

When he returned to Germany in 1949, he and his friend, Horkheimer, rebuilt the Institute for Social Research and the Frankfurt School of critical theory. His endeavors were central to Germany’s intellectual revival post-World War II.

There is no true life within a false life.

The recent past always presents itself as if destroyed by catastrophes. The expression of history in things is no other than that of past torment.

Even the aesthetic activities of political opposites are one in their enthusiastic obedience to the rhythm of the iron system.

But there is another conclusion: to laugh at logic if it runs counter to the interests of men.

They [the critics] deal with Schoenberg’s early works and all their wealth by classifying them, with the music-historical cliché, as late romantic post-Wagnerian. One might just as well dispose of Beethoven as a late-classicist post-Haydnerian.

The paradise offered by the culture industry is the same old drudgery. Both escape and elopement are pre-designed to lead back to the starting point. Pleasure promotes the resignation which it ought to help to forget.

The need to let suffering speak is a condition of all truth.

One should never begrudge deletions.

The work of art still has something in common with enchantment: it posits its own, self-enclosed area, which is withdrawn from the context of profane existence, and in which special laws apply. Just as in the ceremony the magician first of all marked out the limits of the area where the sacred powers were to come into play, so every work of art describes its own circumference which closes it off from actuality.

A film which followed the code of the Hays Office to the strictest letter might succeed in being a great work of art, but not in a world in which a Hays Office exists.