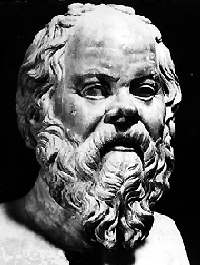 Little is known about the actual life of Athenian philosopher, Socrates (c. 469–399 BC), but his methodologies and ideas have had immeasurable influence on both ancient and modern philosophy. Socrates wrote nothing down, he founded no school and formed no sect, and yet he is famous for developing the Socratic Method, which provided the groundwork for Western logic and philosophy.

What we know of him comes mostly from the writings of two of his famous students, Plato and Xenophon. They write of his unrelenting courage in three Peloponnesian wars and throughout his entire life, even unto death, where against the urging of his students he does not flee his condemnation to death by poisoning, but embraces it fearlessly. We learn of his vast humility and poverty, and deep concern for the intellectual development of Athenian youth.

For Socrates, the world was divided into two realms: the world of senses and the world of ideas. He believed the latter held more importance, and encouraged dialectic discussions to help people form logical conclusions. Socrates believed creating an ethical system of rule based on human reasoning would improve the good of society more than any theological doctrine.

Socrates did not call himself a teacher because, he said, he had no ideas of his own. According to his students, he offered no answers but always inquired. He spoke to the elite and the commoner alike to better understand definitions of values. For this ancient man of mystery, the understanding of one’s own ignorance was truly the beginning of wisdom.

Prefer knowledge to wealth, for the one is transitory, the other perpetual.

I am not an Athenian or a Greek, but a citizen of the world.

No man has the right to be an amateur in the matter of physical training. It is a shame for a man to grow old without seeing the beauty and strength of which his body is capable.

Employ your time in improving yourself by other men’s writings so that you shall come easily by what others have labored hard for.

Every action has its pleasures and its price.

Do not do to others what angers you if done to you by others.

The only good is knowledge and the only evil is ignorance.

Death may be the greatest of all human blessings.

When the debate is lost, slander becomes the tool of the loser.