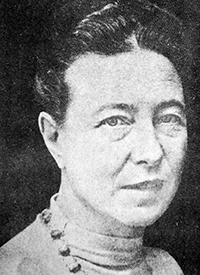 French author and activist, Simone de Beauvoir (1908-1986), is considered the mother of the modern feminist movement. In her famous treatise, The Second Sex, she rejects the artificial femininity created to support a male-driven worldview that theirs is the essential sex, calling for a moral revolution.

Raised by middle-class, Catholic parents, Simone rejected her faith and upbringing (Memoirs of Dutiful Daughter) to pursue the philosophical examination of existence. Her radical, open-relationship with the father of existentialism himself, Jean-Paul Sartre, influenced her writing more than anyone else, even declaring their relationship her greatest achievement.

Her many memoirs endeared her to the public despite her embrace of communism. A Very Easy Death, her most touching memoir, contains reflections on her mother’s last days. The novel She Came to Stay examines jealousy and angst in a fictionalized account of Simone’s strained love-triangle with Sartre and former student, Olga.

From philosophy (The Ethics of Ambiguity) to travel accounts of China (The Long March) and the U.S. (America Day by Day), recurring themes of femininity and existentialism, in all her works, continue to engage and inspire.

Her most famous novel, The Mandarins, won the acclaimed French Literary award, the Prix Goncourt. It chronicles the lives of postwar, French intellectuals who leave their elite and privileged social status for a life of political activism. De Beauvoir always did find the French overly obsessed with money and class.

In the words of the headline that announced de Beauvoir’s death, feminists today still proclaim, “Women! You owe her everything!”

I hadn’t known Chancel very well, but ten days earlier I had seen him laughing with the others around the Christmas tree. Maybe Robert was right; the distance between the living and the dead really isn’t very great. And yet, like myself, those future corpses who were drinking their coffee in silence appeared ashamed to be so alive.

There were no scruples, no feelings of respect or loyal affection that would stop us from making up our minds by the pure light of reason – and of our own desires.

My contemplation is an excruciation only because it is also a joy.

I would have to have a bit of heroism and get out of myself. But I love myself so much!

A woman’s situation, i.e those meanings derived from the total context in which she comes to maturity, disposes her to apprehend her body not as instrument of her transcendence, but “an object destined for another.

I enjoyed my exhaustion, though; I liked overdoing things.

It must be said in addition that the men with the most scrupulous respect for embryonic life are also those who are most zealous when it comes to condemning adults to death in war.

Masculine desire is as much an offence as it is a compliment; in so far as she feels herself responsible for her charm, or feels she is exerting it of her own accord, she is much pleased with her conquests, but to the extent that her face, her figure, her flesh are facts she must bear with, she wants to hide them from this independent stranger who lusts after them.

One can never know oneself but only narrate oneself.

As we talked in the half-darkness I assuaged an old unhappiness.