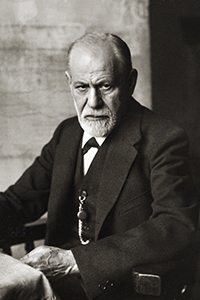 Considered the father of psychoanalysis, Sigmund Freud’s innovative approaches to treating mental problems, and his theories regarding child sexuality, the ego, and the libido have made him a household name even nearly a century later.

The Austrian doctor, scientist and psychiatrist changed the face of psychology with his “talk therapy,” which allowed patients to vent their pent up emotions and thoughts, and in doing so, find a sense of relief. Though he worked with hypnosis for a time, he largely moved away from that popular arena and focused on free association and transference in his practice.

Many know his name because of phrases like, “Oedipus complex, or “oral fixation,” and it is true that Freud firmly held that all neuroses contained a sexual basis. He believed forgotten and repressed memories were the cause of pain and suffering. His groundbreaking idea that mental disorders may occur in the mind, and not in the brain, opened up avenues for extensive new research and thought.

Most of his ideas faced criticism and challenges in his day, perhaps most notably, his phallic-centric theories of sexual development. However, despite a controversial career Freud remained a highly original thinker whose concepts of the unconscious (the id, ego and superego), and dream interpretation and symbolism have been useful and important to the fields of psychology, art, sociology, and religion.

Religion is an illusion and it derives its strength from the fact that it falls in with our instinctual desires.

The madman is a dreamer awake.

Religion is a system of wishful illusions together with a disavowal of reality, such as we find nowhere else but in a state of blissful hallucinatory confusion. Religion’s eleventh commandment is “Thou shalt not question.”

Where does a thought go when it’s forgotten?

Everywhere I go I find a poet has been there before me.

No, our science is no illusion. But an illusion it would be to suppose that what science cannot give us we can get elsewhere.

Whoever loves becomes humble. Those who love have, so to speak, pawned a part of their narcissism.

It is impossible to escape the impression that people commonly use false standards of measurement — that they seek power, success and wealth for themselves and admire them in others, and that they underestimate what is of true value in life.

In the depths of my heart I can’t help being convinced that my dear fellow-men, with a few exceptions, are worthless.

Immorality, no less than morality, has at all times found support in religion.