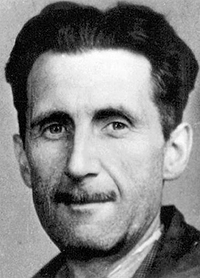 At times called the consciousness of his generation, George Orwell (1903-1950) is best known for his satirical novels, which addressed the major political movements of the day. From awkward and withdrawn youth, to literary and political rebel, Orwell was always known for his deep intelligence and creative mind.

After college, and a brief career as a colonial police officer in Burma, Orwell lived in poverty for many years working odd jobs. However, those experiences gave him the substance for his novel, Down and Out in Paris and London. Many of Orwell’s writings were strongly autobiographical, including the time he spent in the militia in Spain (Homage to Catalonia), working as a colonial officer (Burmese Days), and his days living with the destitute miners of northern England (The Road to Wigan Pier).

With poignant wit and insight, Orwell built a reputation as a literary critic and became a prolific journalist with the publication of numerous essays, reviews and newspaper articles. It was, however, with the publication of Animal Farm, that Orwell enjoyed real success and prosperity for the first time. Considered one of his finest novels, it is a fantastical account of Stalin and Trotsky, and the failure of communism.

His most renowned novel, 1984, was published just before he died from a long struggle with tuberculosis. The dark, anti-utopian novel exposed how deeply the dangers of totalitarianism run, and it coined phrases still used today to describe political abuses. It established Orwell with a lasting legacy as a brilliant and insightful writer.

Stamp-collectors are a strange, silent fish-like breed, of all ages, but only of the male sex; women, apparently, fail to see the peculiar charm of gumming bits of coloured paper into albums.

There must have been about two minutes during which I assumed that I was killed. And that too was interesting — I mean, it is interesting to know what your thoughts would be at such a time. My first thought, conventionally enough, was for my wife. My second was a violent resentment at having to leave this world which, when all is said and done, suits me so well.

It is often necessary for a member of the Inner Party to know that this or that item of war news is untruthful, and he may often be aware that the entire war is spurious and is either not happening or is being waged for purposes quite other than the declared ones: but such knowledge is easily neutralized by the technique of doublethink.

His bowels seemed to turn to water.

Their combined ages were two hundred and sixty-three years. None of them had ever been out of England, fought in a war, been in prison, ridden a horse, travelled in an aeroplane, got married, or given birth to a child. There seemed no reason why they should not continue in the same style until they died. Year in, year out, nothing ever happened in the Comstock family.

It is a serious matter to shoot a working elephant — it is comparable to destroying a huge and costly piece of machinery — and obviously one ought not to do it if it can possibly be avoided.

A tremor had gone through his bowels.

Political language – and with variations this is true of all political parties, from Conservatives to Anarchists – is designed to make lies sound truthful and murder respectable, and to give an appearance of solidity to pure wind.

Fascism has nothing to do with capitalism. Fascism is just a kind of meaningless wickedness, an aberration, ‘mass sadism’, the sort of thing that would happen if you suddenly let loose an asylumful of homicidal maniacs.

Totalitarianism, however, does not so much promise an age of faith as an age of schizophrenia. A society becomes totalitarian when its structure becomes flagrantly artificial: that is, when its ruling class has lost its function but succeeds in clinging to power by force or fraud. Such a society, no matter how long it persists, can never afford to become either tolerant or intellectually stable.