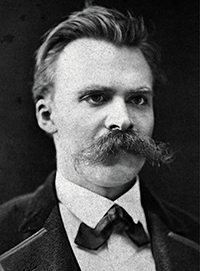 It is difficult to name a philosopher, artist, or writer of the 20th century who was not influenced by German philosopher and classical scholar, Friedrich Nietzsche (1844-1900), who famously wrote, “God is dead.” While his works tend to evoke either passionate love or furious disgust, Nietzsche was called in his day a “man of limitless talent and profound imaginative insight.”

Though his name has been linked to Adolf Hitler and the Nazi Regime, largely due to his sister’s misrepresentation of him and his works as caretaker of his legacy after his death (The Will to Power), Nietzsche was always opposed to nationalism and antisemitism.

Known for his anti-Christian writing (The Antichrist), which foresaw the decline of traditional religion in modern society, he argued for self-awareness and identity as crafted by the individual, beyond the limitations of transcendental beliefs like God or the soul, in order to become one’s best self.

His works do not isolate one particular theme of thought, for he wrote extensively on many subjects such as history, truth, morality, language and consciousness, which greatly influenced Western philosophy with recurring concepts on nihilism, the “will to power,” eternal recurrence, and the Übermensch (Thus Spoke Zarathustra).

After suffering chronic pain his entire life due to migraines, half blindness, and the lingering effects of dysentery and diphtheria, Nietzsche collapsed from a mental breakdown on the streets of Turin, Italy, in 1889, and never recovered his mental lucidity. He lived for another ten years in the care of either family or asylums before he died of a stroke in 1900.

Their [philosophers] thinking is, in fact, far less a discovery than a re-recognizing, a remembering, a return and a home-coming to a far-off, ancient common-household of the soul, out of which those ideas formerly grew: philosophizing is so far a kind of atavism of the highest order.

Growth in wisdom can be measured precisely by decline in bile.

For nothing is more democratic than logic; it is no respecter of persons and makes no distinction between crooked and straight noses.

From the sun did I learn this, when it goeth down, the exuberant one: gold doth it then pour into the sea, out of inexhaustible riches, So that the poorest fisherman roweth even with golden oars! For this did I once see, and did not tire of weeping in beholding it. Like the sun will also Zarathustra go down: now sitteth he here and waiteth, old broken tables around him, and also new tables half-written.

The melancholy of everything completed!

But like infection is the petty thought: it creeps and hides, and wants to be nowhere – until the whole body is decayed and withered by the petty infection… Thus spoke Zarathustra.

A little wisdom is indeed possible; but this blessed security have I found in all things, that they prefer – to DANCE on the feet of chance.

Truth as Circe – Error has transformed animals into men; is truth perhaps capable of changing man back into an animal?

This book belongs to the most rare of men. Perhaps not one of them is yet alive. First the day after tomorrow must come for me. Some men are born posthumously.