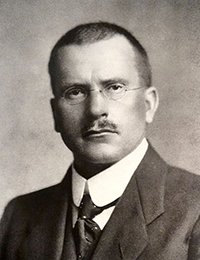 The Swiss psychologist and psychiatrist, Carl Jung, developed and furthered some of the most important thoughts and theories of the 20th century. His influence spread not only throughout the psychological world, but also throughout art, religion and literature. Known for developing analytical psychology, and his work expounding on the extravert and introvert personality types, Jung’s theories about the unconscious mind also carry lasting influence and intrigue.

Jung was expected to follow in the footsteps of his father and become a clergyman, but his interest in philosophy led him down a different route. Eventually, he found his way to medicine and earned his M.D from the University of Zurich.

A short partnership and friendship with Sigmund Freud helped the young Jung develop his theories, but eventually the two parted ways forever. Jung outspokenly disagreed with Freud’s view of a sexual basis for neurosis (The Psychology of the Unconscious).

As Jung continued to study his own unconscious mind, he developed the idea that all of humanity shares a collective unconscious, and this can be seen in patterns and symbols that have arisen throughout history (Psychology & Alchemy).

By unfolding one’s own myth through dreams and imagination, Jung believed that people could become whole or complete personalities (Modern Man in Search of a Soul). Ever fascinated with the growth of personality and one’s own inner development, he named the process of this self-discovery “individuation” (The Undiscovered Self). It is a lifelong task of trial and error, but to paraphrase Jung, eventually we all “become what we are.”

Not everything I bring forth is written out of my head, but much of it comes from the heart also.

Is that which science calls the psyche not merely a question-mark arbitrarily confined within the skull, but rather a door that opens upon the human world from a world beyond, now and again allowing strange and unseizable potencies to act upon him and to remove him, as if upon the wings of the night, from the level of common humanity to that of a more personal vocation?

God is not dead. Now, as ever, he liveth.

Everything psychic is pregnant with the future.

I swayed between fear, defiance, and nausea, and was wholly the prey of my passion. I could not and did not want to listen to the depths. But on the seventh night, the spirit of the depths spoke to me: Look into your depths, pray to your depths, waken the dead.

I am astonished, disappointed, pleased with myself. I am distressed, depressed, rapturous. I am all these things at once, and cannot add up the sum.

The psyche is a self-regulating system that maintains itself in equilibrium as the body does.

For underlying all philosophies and all religions are the facts of the human soul, which may ultimately be the arbiters of truth and error.

Teachings about the “infantile-perverse-criminal” unconscious have led people to make a dangerous monster out of the unconscious, that really very natural thing. As if all that is good, reasonable, beautiful and worth living for had taken up its abode in consciousness!