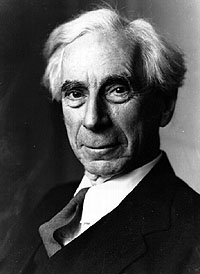 Winner of the 1950 Nobel Peace Prize in Literature, Bertrand Russell (1872-1970), philosopher and mathematician, wrote, incredibly, a total of 70 books and over 2,000 articles in his 98-year lifespan. Gifted with the ability to write about difficult philosophical and mathematical topics in a language accessible to the layperson, Russell inspired readers with his passion and insight.

Orphaned at age 3, Russell was raised by his grandmother and schooled at home by governesses and tutors. He perfected French and German, and called Euclidean geometry his “first love.” At Trinity College, he earned degrees in both Mathematics and the Moral Sciences. He combined both passions in an attempt to discover a way to prove that truth was immutable and eternal. Initially, Russell argued for a metaphysical idealism in his works, but later on abandoned that theory for analytic philosophy.

After being fired from his position at Trinity College for campaigning against conscription during WWI, and jailed for six months by the British government, Russell found journalism and freelance writing more to his taste and carved a name for himself as an anti-war activist. Later, he campaigned against nuclear weapons and the Vietnam War, which led the British judiciary system to jail him again at the age of 89.

His extensive writing on social, political and moral issues granted him popularity in his day as a writer, but his contributions to logic and the philosophy of mathematics earned him the respect of generations to come as one of the foremost philosophers of the 20th century.

A vast collection of electric charges in violent motion.

The stuff of which the world of our experience is composed is, in my belief, neither mind nor matter, but something more primitive than either. Both mind and matter seem to be composite, and the stuff of which they are compounded lies in a sense between the two, in a sense above them both, like a common ancestor.

If it is the devil that tempts the young to enjoy themselves, is it not the same personage that persuades the old to condemn their enjoyment? And is not condemnation perhaps merely a form of excitement appropriate to old age?

The whole problem with the world is that fools and fanatics are always so certain of themselves, but wiser people so full of doubts.

Ridicule, nominally amusing but really an expression of hostility, was the favourite weapon — the worst possible, short of actual cruelty, in dealing with young people.

Proper task of philosophy is to remind ourselves of what we already know to be true.

Political and social institutions are to be judged by the good or harm that they do to individuals. Do they encourage creativeness rather than possessiveness? Do they embody or promote a spirit of reverence between human beings? Do they preserve self-respect?

The supply of uranium in the planet is very limited, and it is feared that it may be used up before the human race is exterminated, but if the practically unlimited supply of hydrogen in the sea could be utilized there would be considerable reason to hope that homo sapiens might put an end to himself, to the great advantage of the other less ferocious animals.

Altogether it will be found that a quiet life is characteristic of great men, and that their pleasures have not been of the sort that would look exciting to the outward eye. No great achievement is possible without persistent work, so absorbing and so difficult that little energy is left over for the more strenuous kinds of amusement.

The problem of finding a collection of wise men and leaving the government to them is thus an insoluble one. That is the ultimate reason for democracy.