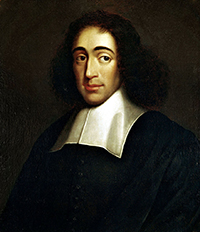 The Dutch-Jewish philosopher, Baruch Spinoza (1632-1677), who later took the Latin name Benedictus when he was excommunicated from his synagogue, was respected by philosophers for being both rational and undogmatic.

He is considered a radical philosopher of the early modern era who helped usher in the Enlightenment. Spinoza firmly believed that virtue and happiness were only attained through reason, and not through passion or religious doctrine. While some have called him a “God-intoxicated man”, others say he was the first philosopher to make atheism into a philosophical system. Balancing somewhere in between religiosity and atheism, Spinoza argued in his pinnacle work, Ethics, that God is the sole infinite substance of the universe, and everything else is but a part of God. He attempted to demystify the universe and human beings in the light of logic.

Known for authoring one of the few books ever banned in the Netherlands, the publication of Spinoza’s Tractatus Theologico-Politicus in 1670 confirmed him as a heretic. Spinoza stated that the history of the Jews was no more extraordinary than any other people, the soul is not immortal, and he offered a thorough biblical critique blended with political philosophy. In the end, he argued that all people should have complete freedom of thought, and freedom of speech, without fear of persecution.

Spinoza died of consumption in 1677 without an heir, and with few possessions. His philosophical system, a combination of Jewish rationalism, Cartesian metaphysics and Stoicism is considered highly original and of lasting relevance.

A free man thinks of nothing less than of death, and his wisdom is a meditation not on death but on life.

Whether this desire for sex is moderate or not, it is usually called lust.

All happiness or unhappiness solely depends upon the quality of the object to which we are attached by love.

It is the part of a wise man, I say, to refresh and restore himself in moderation with pleasant food and drink, with scents, with the beauty of green plants, with decoration, music, sports, the theater, and other things of this kind, which anyone can use without injury to another.

These are the prejudices which I undertook to notice here. If any others of a similar character remain, they can easily be rectified with a little thought by anyone.

No reason compels me to maintain that the body does not die unless it is changed into a corpse. And, indeed, experience seems to urge a different conclusion. Sometimes a man undergoes such changes that I should hardly have said he was the same man.

What Paul says about Peter tells us more about Paul than about Peter.

We feel and know that we are eternal.

Things which are accidentally the causes either of hope or fear are called good or evil omens.