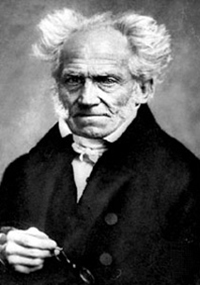 Born to wealthy German parents in Poland, Schopenhauer was raised to take over his father’s merchant business. When his father died, the lure of scholarly pursuits was too strong for Schopenhauer to ignore, and he left his business apprenticeship for the University of Gottingen to study natural sciences and philosophy.

After earning his doctorate of philosophy from the University of Jena with his dissertation, On the Fourfold Root of the Principle of Sufficient Reason, he began a career as professor at the University of Berlin. There, his rivalry with Georg Wilhelm Friedrich Hegel began and it endured through their lives.

During this time, he published his most famous work, The World as Will and Idea, which established him as a foremost philosopher. In it, Schopenhauer discusses the self-centeredness of mankind and the aimlessness of human direction. Influenced also by Hindu mysticism and Buddhism, Schopenhauer reflected that desire was the root of pain and suffering.

Fearing the cholera epidemic in Berlin, Schopenhauer renounced his professorship and moved to Frankfurt where he lived as a recluse for the next 28 years before his death. He kept the company of poodles and cats, maintained a lasting friendship with Johann Wolfgang von Goethe, and continued to clarify and affirm the original philosophical system laid out in The World as Will and Idea with multiple new editions.

The nobler and more perfect a thing is, the later and more slowly does it mature.

Our life is to be regarded as a loan received from death, with sleep as the daily interest on this loan.

Reading is merely a surrogate for thinking for yourself; it means letting someone else direct your thoughts. Many books, moreover, serve merely to show how many ways there are of being wrong, and how far astray you yourself would go if you followed their guidance.

Fundamentally it is only our own basic thoughts that possess truth and life, for only these do we really understand through and through. The thoughts of another that we have read are crumbs from another’s table, the cast-off clothes of an unfamiliar guest.

You can apply yourself voluntarily to reading and learning, but you cannot really apply yourself to thinking: thinking have to be kindled, as a fire is by a draught, and kept going by some kind of interest in its object, which may be an objective interest or merely a subjective one.

You can know only what you have thought about.

As the biggest library if it is in disorder is not as useful as a small but well-arranged one, so you may accumulate a vast amount of knowledge but it will be of far less value to you than a much smaller amount if you have not thought it over for yourself.

He who truly thinks for himself is like a monarch, in that he recognizes no one over him. His judgements, like the decisions of a monarch, arise directly from his own absolute power. He no more accepts authorities than a monarch does orders, and he acknowledges the validity of nothing he has not himself confirmed.

There is no happiness on earth to compare with that which a beautiful and fruitful mind finds in a propitious hour within itself.