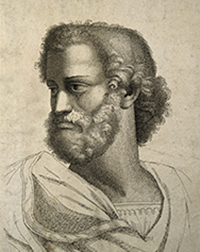 The founder of formal logic, Greek philosopher Aristotle (384–322 BC), was also an astounding scientist, who pioneered the study of zoology. Indeed, his scope of intellect ranged from ethics to aesthetics, logic and biology and everything in between. He enrolled in Plato’s Academy when he was 17 and devoted his entire life to study. After Plato’s death, Aristotle went on to be the private tutor to Alexander the Great for at a time, and then, with Alexander’s permission, built his own academy in Lyceum.

At the school, Aristotle was known to lecture while walking about the campus, which gave rise to his students being dubbed, “Peripatetics,” or those who travel from place to place. The school housed one of the most impressive libraries of the ancient world, and offered open and free lectures to the public.

Christian scholasticism and Medieval Islamic philosophy were rooted in Aristotle’s philosophical and scientific systems. He formalized universal principles of logic that used deduction and inference to form logical arguments, his most famous being syllogism.

Despite only 31 of his 200 manuscripts remaining today, Aristotle’s legacy remains immeasurably far-reaching as his arguments touched on almost every aspect of human knowledge, and philosopher’s continue to debate, interpret and teach his principles.

Inequality is everywhere at the bottom of faction, for in general faction arises from men’s striving for what is equal.

It is well said, then, that it is by doing just acts that the just man is produced, and by doing temperate acts the temperate man; without doing these no one would have even a prospect of becoming good.

It was at this point that the transition was first made to the conception that rhetoric was a teachable skill, that it could, usually in return for a fee, be passed from one skilled performer on to others, who might thereby achieve successes in their practical life that would otherwise have eluded them.

In everything continuous and divisible, it is possible to grasp the more, the less, and the equal, and these either in reference to the thing itself, or in relation to us.

One must learn by doing the thing, for though you think you know it, you have no certainty until you try.

All art, all education, can be merely a supplement to nature.

The greatest thing by far is to be a master of metaphor; it is the one thing that cannot be learnt from others; and it is also a sign of genius, since a good metaphor implies an intuitive perception of the similarity in the dissimilar.

Again, those also who are ignorant of legal regulations which they are bound to know, and which are not hard to know, they chastise; and similarly in all other cases where neglect is thought to be the cause of the ignorance, under the notion that it was in their power to prevent their ignorance, because they might have paid attention.

It is all wrong that a person who is going to be deemed worthy of the office should himself solicit it, for no one who is not ambitious would ask to hold office.