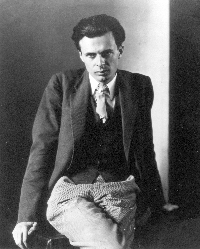 Born to a prominent intellectual English family in 1894, it seemed Aldous Huxley (1894-1963) was destined to become a scientist. Instead, when a serious illness left him nearly blind, he abandoned his scientific dreams to pursue a literary career. Graduating from Balliol College, Oxford in 1916 with a degree in English Literature, Huxley published his first book, a collection of poems, The Burning Wheel.

Huxley hobnobbed with some of the most famous writers of the 20th century at Garsington Manor, a gathering place for intellectuals like Virginia Woolf, T. S. Eliot, and D. H. Lawrence. These experiences gave Huxley the substance for his early, satirical novels on contemporary intellectual society (Antic Hay, Those Barren Leaves, Point Counter Point). At the same time, he was writing witty periodicals for Vanity Fair and Vogue.

Known for his far-reaching intelligence in his most famous novels like Brave New World and Island, which considered the positive and negative impacts of science and technology on society, Huxley was a successful screenwriter as well (Alice in Wonderland, Jane Eyre, Madam Curie).

When he moved to California in the 1930s, he developed an interest in Eastern mysticism and philosophy, which he believed was an alternative to the emptiness of contemporary society (The Perennial Philosophy).

Always writing, Huxley even documented his experiences with the drug mescaline in The Doors of Perception, and wrote a moving autobiography, This Timeless Moment, about his second wife. His lively mind and elegant style defined him as one of the most profound thinkers of his generation, and the most representative writer of his century.

Meanwhile there is still some freedom left in the world. Many young people, it is true, do not seem to value freedom. But some of us still believe that, without freedom, human beings cannot become fully human and that freedom is therefore supremely valuable. Perhaps the forces that now menace freedom are too strong to be resisted for very long. It is still our duty to do whatever we can to resist them.

He would think of Heaven and London and Our Lady of Acoma and the rows and rows of babies in clean bottles and Jesus flying up and Linda flying up and the great Director of World hatcheries and Awonawilona.

Mothers and fathers, brothers and sisters. But there were also husbands, wives, lovers. There were also monogamy and romance. “Though you probably don’t know what those are,” said Mustapha Mond. They shook their heads. Family, monogamy, romance. Everywhere exclusiveness, a narrow channelling of impulse and energy. “But every one belongs to every one else,” he concluded, citing the hypnopædic proverb.

There was a silence. In spite of their sadness – because of it, even; for their sadness was the symptom of their love for one another – the three young men were happy.

I’ll teach you; I’ll make you be free whether you want to be or not.

It is by manipulating “hidden forces” that the advertising experts induce us to buy their wares – a toothpaste, a brand of cigarettes, a political candidate. And it is by appealing to the same hidden forces – and to others too dangerous for Madison Avenue to meddle with – that Hitler induced the German masses to buy themselves a Fuehrer, an insane philosophy and the Second World War.

In the Brave New World of my prophetic fable technology had advanced far beyond the point it had reached in Hitler’s day; consequently the recipients of orders were far less critical than their Nazi counterparts, far more obedient to the order-giving elite.

That which had made Helmholtz so uncomfortably aware of being himself and all alone was too much ability.

Thanks to technological progress, Big Brother can now be almost as omnipresent as God.