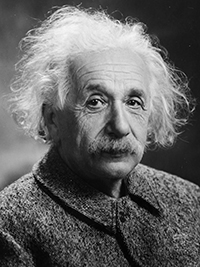 Albert Einstein (1879-1955), the greatest physicist of the 20th century, regarded his work as mere stepping stones for those who would come after to advance science. Though he is famous for turning the physics world upside down with his theory of relativity, Einstein was also heavily involved in both pacifist and civil rights movements.

Awarded the Nobel Prize for Physics in 1921, Einstein was confident years earlier that he would one day win the prize. To paraphrase his own words, Einstein stated that God gave him stubbornness and a keen scent, nothing more.

Einstein was born in Germany, but also lived in both Italy and Switzerland before moving to New Jersey in 1933 where he took a job as professor of Theoretical Physics at Princeton. For the rest of his life, he would work on developing his unified field theory and theories surrounding relativity like, time travel, black holes, and the creation of the universe.

To his regret, Einstein wrote to Franklin D. Roosevelt urging him to develop an atomic bomb before the Nazis. However, when he saw his famous E=mc2 used in the most horrendous way – the bombing of Hiroshima in 1945 – Einstein could only say, “Horrible, horrible.”

He wrote many famous and significant books, with Relativity and The Evolution of Physics being two of the best known, and Why War? and My Philosophy being important non-scientific books. Einstein died in 1955 at the age of 76, regarded as a genius, and the most influential physicist of the 20th century.

The words or the language, as they are written or spoken do not seem to play any role in my mechanism of thought.

I do not believe there is a way in which this deeply entrenched evil can be quickly healed. But until this goal is reached there is no greater satisfaction for a just and well-meaning person than the knowledge that he has devoted his best energies to the service of the good cause.

A theory is more impressive the greater the simplicity of its premises, the more different are the kinds of things it relates, and the more extended its range of applicability.

A serious-minded man enjoys a good laugh now and then.

All our science, measured against reality, is primitive and childlike — and yet it is the most precious thing we have.

Be a voice, not an echo.

Never give up on what you really want to be. The person with big dreams is more powerful than one with all the facts.

Out of clutter, find simplicity. From discord, find harmony. In the middle of difficulty lies opportunity.

The right to search for truth implies also a duty; one must not conceal any part of what one has recognized to be true.