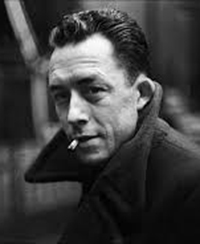 French-Algerian novelist and essayist, Albert Camus (1913-1960) is often called a “spokesman for his generation” and a “mentor for the next.” His dominant contribution to philosophy was his reflection on the Absurd. In The Myth of Sisyphus he calls for a revolt against the futile search for the meaning of life, and to fight for values like truth, moderation and justice while creating personal meaning and autonomy.

In an era of nihilists and communists, Camus was neither and often wrote against such ideas (and often fought drunk, offended communists). During the Nazi Occupation in Paris, Camus joined a resistance movement and wrote as an underground journalist. As a political theorist, he outlined ideas for a liberal humanism that rejected Christian and Marxist dogma.

His dedicated search for moral order (The Rebel), his consistent assertion for human dignity and fraternity (The Plague) won him the Nobel Peace Prize for Literature in 1957 at the age of 44. In characteristic modesty, Camus asserted it should have gone to André Malraux.

Perhaps surprisingly, it was as a playwright that he found the most satisfaction and personal success. His adaptations of Requiem for a Nun and Possession are his most recognized contributions to the theater.

Writing always beyond his ability, Camus said this practice inspired continual effort, but also caused personal exhaustion. He wrestled with depression, and wrote under the burden of perfectionism – never happy in his work, yet always pressing onward.

Camus died in a car accident at the age of 46; his death considered a tragic loss to literature.

In the past, the poverty they shared had a certain sweetness about it. When the end of the day came and they would eat their dinner in silence with the oil lamp between them, there was a secret joy in such simplicity, such retrenchment.

To begin with, poor people´s memory is less nourished than that of a rich; it has fewer landmarks in space because they seldom leave the place where they live, and fewer reference points in time throughtout lives that are grey and featureless.

When one has no character, one HAS to apply a method. Here it did wonders incontrovertibly, and I am living on the site of one of the greatest crimes in human history.

To stay or to go, it amounted to the same thing.

If, after all, men cannot always make history have a meaning, they can always act so that their own lives have one.

You will always win if you make an effort, no matter how much. However, if you failed it means you were too lazy.

Thoughts of suicide have got me through many a bad night.

Healthy people have a natural skill of avoiding feverish eyes.

If I convince myself that this life has no other aspect than that of the absurd, if I feel that its whole equilibrium depends on that perpetual opposition between my conscious revolt and the darkness in which it struggles, if I admit that my freedom has no meaning except in relation to its limited fate, then I must say that what counts is not the best living but the most living.

At the age of 40, having ordered meat very rare in restaurants all his life, he realized he actually liked it medium and not at all rare.